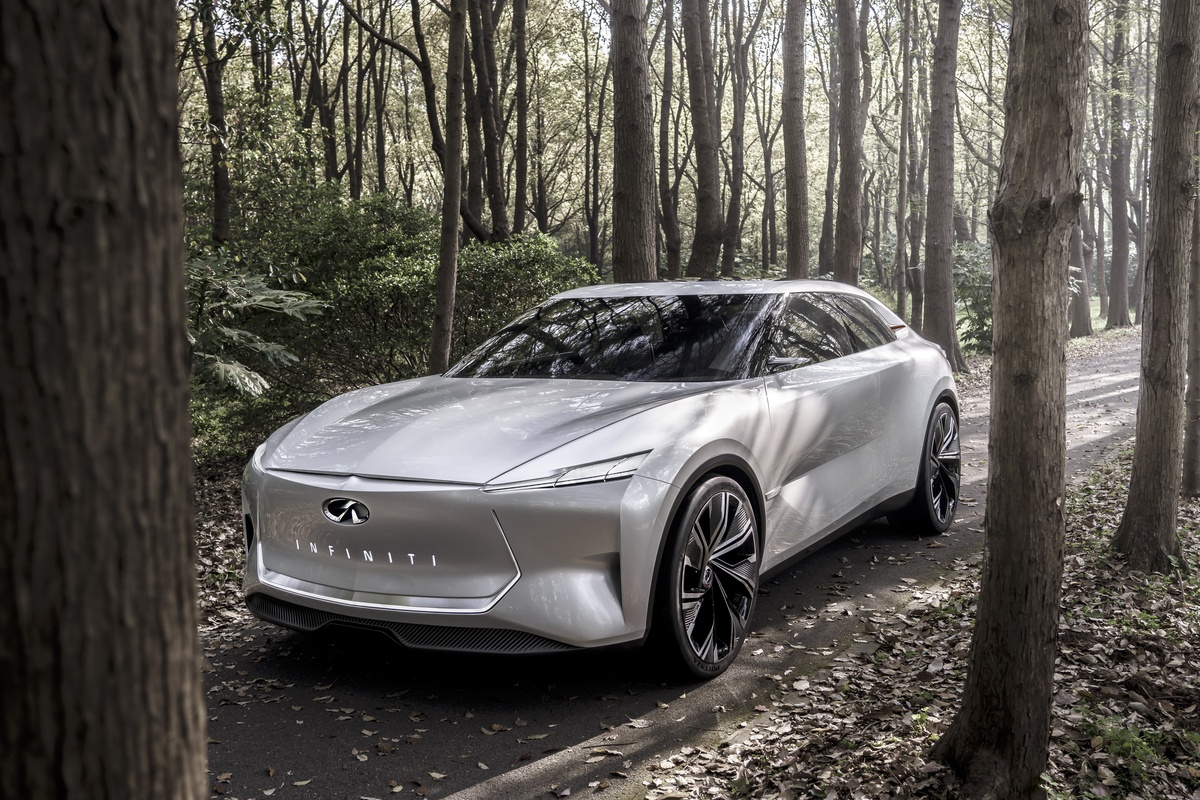 The INFINITI Qs Inspiration concept is the latest in a series of design studies confirming INFINITI’s new form design language for the electrified era.

INFINITI will also showcase its past, present and future: with the futuristic Qs Inspiration, current models on display, as well as a vintage arcade game activation to celebrate the brand’s 30th anniversary

INFINITI Qs Inspiration
This concept was developed for the electrified era and showcases INFINITI’s desire to challenge tradition. Qs Inspiration previews a forthcoming production model and hints at the company’s electrified future in which the brand will offer five new models including three electrified vehicles within the next three years.

“The INFINITI Qs Inspiration signals the future of INFINITI design for our imminent, electrified portfolio. It previews a product that will offer a new perspective on the sports sedan format, with an elevated driving position and high-performance electrified all-wheel drive power.”
– Adam Paterson, managing director, INFINITI Canada

The display at the CIAS marks the second major auto show appearance for the INFINITI Qs Inspiration, following its global debut at the 2019 Shanghai Motor Show. Continuing its tradition of displaying INFINITI Concepts in Canada, the Qs Inspiration is the fourth Concept vehicle to appear at CIAS consecutively.

The INFINITI Qs Inspiration introduces a distinctive new body style for INFINITI, challenging the accepted ‘three-box’ sedan layout. Unshackled from the requirement to accommodate an internal combustion engine as the principal means of propulsion, the physical proportions of the sports sedan can be transformed. This concept is also inspired by art and modern architecture as the design embraces the Japanese spatial concept of ‘Ma‘, emphasizing the open spaces between bold lines.

The clean and concise ambience of the cabin merges a sense of Japanese design composure with striking artistry and craftsmanship, and two distinct zones. The driver-centric cockpit area is clutter-free and features colours, forms and materials to better engage the driver, visually referencing the car’s performance potential. For the passenger zone there is a more relaxed ambience, with individual seats and a subtle colour palette that make the most of the generous interior space.

For more info on the Qs Inspiration: Click here

A level up on anniversary celebrations – presenting INFINITI “Fast Forward”
To celebrate its 30th anniversary in North America, INFINITI created an arcade game called “INFINITI Fast Forward” to commemorate its past achievements and look forward to the future. This interactive installation is a tribute to the halcyon days of arcade gaming in the 1980’s- the decade of INFINITI’s inception – and was developed exclusively for Canada.

During the five-minute game, attendees will drive some of the classic INFINITI vehicles through the years, starting with the Q45 sedan, and will “level up” to the G35 coupe, QX50 luxury crossover, and finally the QX Inspiration. Throughout the game, numerous INFINITI world’s first technologies will be collected, including but not limited to: Blind Spot Warning, Lane departure Warning, and Around View Monitor.

For 30 years, INFINITI has had technological innovation at its core, with a history of developing world-first technologies that have enhanced owners’ driving experiences for the last three decades. The brand remains true to this ideal today.

From launching the world’s first fully-active suspension in 1989, INFINITI has since introduced a series of world-first driver assistance technologies such as the RearView Mirror or back-up camera (2001), Lane Departure Warning (2005) and Around View Monitor (2007).

This innovation has extended to the powertrains found in INFINITI cars, such as the brand’s award-winning naturally-aspirated, performance-hybrid and twin-turbo V6 engines. Most recently, INFINITI launched the world’s first production-ready variable compression ratio engine, dubbed VC-Turbo.

The game will feature road hazards to traverse, allow social sharing using the hashtag #INFINITIFastForward and allow for entry into a contest to win a number of great prizes.